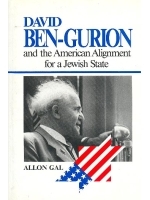 Description:
Against the background of Kristallnacht and Britain’s retreat from the Jewish Mandate for Palestine, David Ben-Gurion shaped a new Zionist foreign policy based on the assumed rise of the United States as a world power that would determine the future of the Middle East. This book traces the evolution of the demand for a Jewish state into a central and specific aim of Zionist policy and the interrelated process by which Ben-Gurion became increasingly oriented toward the United States and American Jewry at the expense of Zionism’s historical connection with Great Britain. Based on new documentary evidence, Allon Gal’s study charts Ben-Gurion’s ascent from the leadership of the Yishuv (the Jewish community in Palestine) to prominence in the world Zionist and international diplomacy. The book also portrays the emergence of American Jewry as a political factor that strove to secure Jewish interests in an open and self-assured fashion.