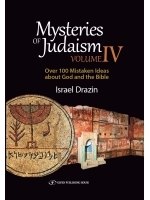 Description:
The Bible has a style that most people do not know and as a result they fail to understand what the Bible is saying. In many cases this causes them to misunderstand Judaism. Below are some examples.