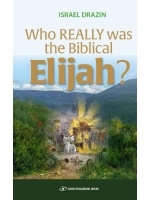 Description:
Dr. Israel Drazin reveals fascinating information about Elijah. Among much else, he reveals that the Bible depicts him as being overzealous, hardly ever showing an interest in helping people, and totally different than the Elijah who appears in the legends of post-biblical literature. In these he is kind, and generally very friendly to people.

God was not satisfied with the biblical Elijah
and God criticized and punished him. Were the fifteen events in which Elijah was involved miracles or natural events?

Most are easy to explain as natural events; some are more difficult to do so. Did God order Elijah to perform the acts? The Bible does not say so. The only times that Elijah was ordered by an angel or God to do something was when he was told to go somewhere, and these instructions could be understood as Elijah having the idea.

Nearly all Elijah’s acts were done because of his overzealous love of God and his abhorrence of idol worship, and apparently show no warm feelings toward people. Yet, the Biblical book Malachi is held by many to prophesy the coming of the prophet Elijah centuries after his death or ascension to heaven. This, despite the fact, as Dr. Drazin shows, Malachi’s prophecy does not seem to deal with the messianic age, but with a resolution of the problems caused by intermarriage. Malachi states, “Behold, I will send to you Eliyah the prophet before that great and dreadful day of the Lord comes. He will turn the heart of fathers to children, and the heart of children to their fathers; or else I will come and strike the land with total destruction.” These words have nothing to do with a messianic age and the legendary Elijah who generally helps people in distress is totally different from the overzealous biblical Elijah with whom God was displeased.