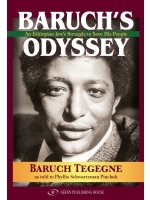 Description:
In 1955, at age 11, Baruch was sent to study in Israel. Returning to Ethiopia at 19, he worked as an agro-mechanic and later bought a farm, on which he and his family prospered…until the Revolution in 1974, when life became unbearable. Baruch was determined to get his people out of Ethiopia and into Israel. His harrowing journey to the Promised Land took three years of travel - by land, sea and air. Baruch’s struggles to save his people ran into many obstacles, not the least of which was racial prejudice. Here is the story of a man and a people who have lived their ideals.