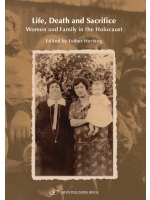 Description:
'…From out of a world of death and destruction, extermination camps, ghettos, starvation and disease, there rises the figure of the woman in the Holocaust… the core of the fascinating studies in this collection. The importance of these research essays is, above all, their historical documentation of situations and events related to women in the Holocaust…

'….In the face of imminent death, there was kindness to be seen, self-sacrifice, and the saving of another’s life. And from a world that had lost all semblance of humanity came a sense of independence that welled up in the survivors, infusing them with the spirit of life as they emerged from the inferno. 'And what is for me the most moving, the most exciting thing of all, is the ability of those who endured to climb to their feet and shake themselves free of the killing fields, to begin a new life, to start a family….'
Ayala Procaccia, Israel Supreme Court Justice


'The book contains articles by some of the most prominent scholars in the field… They tell the stories of women who were humiliated, tortured and murdered; their eternally etched-in-the-memory stories of struggle and survival.

'This collection of articles is based on two international conferences on women in the Holocaust, held in recent years at Beit Berl Academic College, Beit Theresienstadt, and the Ghetto Fighters’ House in Israel. Hertzog is a daughter of Holocaust survivors, who never spoke about the subject at home. She discovered a feminist perspective on the Holocaust at a conference at Oxford she attended, almost by chance, seven years ago. That experience motivated her to speak with her mother and document their conversations in the article that appears herein.'
Ruth Sinai ('“Their heroism was never acknowledged')
Haaretz