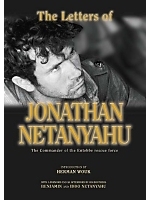 Description:
An Air France flight was hijacked, and 106 passengers, many of them Israeli citizens, were taken hostage in Entebbe, Uganda.

The Letters of Jonathan Netanyahu is a collection of personal letters penned by Netanyahu over a period of thirteen years, from high school in Philadelphia to the raid at Entebbe. Yoni – as he was known to family, friends, and the Israeli nation – is revealed as a devoted and serious man, deeply dedicated to his country and the soldiers under his command.

In his stunning introduction to The Letters of Jonathan Netanyahu, Herman Wouk describes the book as “fortuitous, not a deliberately created work of art,” that succeeds in exposing an intimate dimension of a remarkable young man. And of the Entebbe operation itself, Wouk comments “its fame does not dim…in the continuing struggle of civilized men against the mounting global crime of terrorism, Entebbe shines, a beacon in dense gloom.”

“Yoni’s unpretentious accounts of his accomplishments, simply written and thus the more grand make him the convincing hero he was, and make us wish that more like him were among us.'