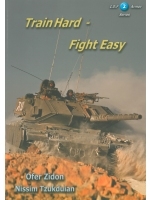 Also available on Amazon.
To order on Amazon click here.
Author: Ofer Zidon (photography)
Price: $60.00
Special Price: $48.00
Format: Paperback
ISBN 10: 9659075723
ISBN 13: 9789659075720
Catalog Number: 9789659075720
Number of Pages: 92
Year Published: 2014
Description:
This book is the second book in our IDF Armor series. The new book covers a rarely published aspect of the IDF - the training of IDF forces to battle. Basic training of IDF forces did not change much over the years, so in this book we are focusing on the advanced training and specially on the combined forces training methods. Changes in the battlefield and in the nature of Israel s enemies brought the IDF to the understanding that the scenario of classic large scale armor battles will not likely to happen in the future. The nature of the battle has changed in favor of small fighting groups consisting of a combination of infantry, armor, combat engineering, artillery and air force units working together, each bringing it's advantage to the battlefield. The IDF train its forces to meet the saying: The whole is more than the sum of its parts. The book contain 92 full color pages with over 200 photos, most of them never published before.
You may also like: